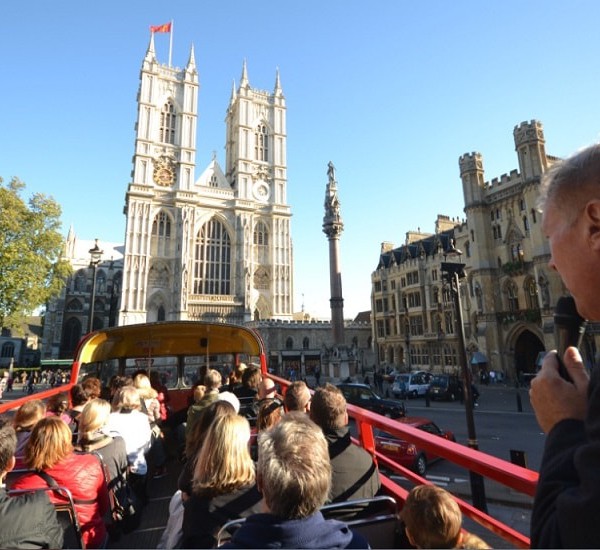 Highlights of London On A Vintage Bus

See all the major attractions of London sitting on the city’s Vintage Bus called the ‘Routemaster’. This tour covers all the major sights such as Big Ben, The Houses of Parliament and St. Paul’s Cathedral. On this tour you will take photo stop at Westminster Abbey and the Tower of London.

Later you take a cruise from Tower Pier on the river Thames and disembark at Embankment Pier. Whilst on the cruise you will see Shakespeare’s Globe, London Bridge and more so… have your cameras ready!

After disembarking at Embankment Pier the tour will resume back on the Routemaster passing through Charing Cross and the famous Trafalgar Square, making your way then to see Buckingham Palace.

After arriving at Buckingham Palace you will see the world famous Changing of the Guards ceremony, subject to availability as guard change takes place on certain days every month. During this ceremony you will see soldiers dressed in their fabulous tunics and busbies, march to military music. If the guards change is not on, you will stop for photos at the Palace.

This tour includes audio guide in various languages such as French, German, Italian, Spanish, Brazilian (Portuguese), Japanese, Hindi, Chinese and Russian. Before the tour starts you will be given headsets to listen to the commentary in these languages.

Following an hours free time for lunch in Victoria, you will board a luxury air-conditioned coach and head for the most famous prehistoric monument in the world. Stonehenge, a world heritage site, stands alone in the vast empty tract of Salisbury plain. Its origins date back nearly 5,000 years and it has been home to pagan religion and spiritual worship, not to be mention public debate ever since. What was this vast collection of stones intended for? Check Out yourself when you visit this historic monument. Entrance to the site with audio guide is included.

Please Note – Until 31st October 2017 the tour of London is available with audio guide in 10 languages (French, German, English, Spanish, Portuguese, Italian, Japanese, Mandarin, Hindi and Russian). From 1st November 2017 there will be an English speaking live guide only.